To test the existing functionality of LilyVM and its assembler, I decided to implement a simple, well-known cryptography algorithm, RC4. It's not the kind that anyone should use today, because it's got a lot of known effective attacks against it, but it's an easy real-world example of a simple algorithm to play with.

I also like to use it as a random number generator.

Here's the RC4 implementation I made a long time ago that I tested it against.

The actual code follows below. Excuse the lack of syntax highlighting. I guess I need to make the syntax a little more like some common assembler syntax to use an off-the-shelf syntax highlighter.

This code probably will not work for much longer because the assembler and VM are both works in progress. Not that it matters, because I still haven't actually put the source code out anywhere yet. This is mostly a message to any future users (and myself) that this code is not a good example to use.

Final disclaimer: There may be lots of bugs in this implementation.

It'll probably take a while before I get all the fixes and changes done I mentioned here. So I'm not sure when the next time I'll post is going to be.

Disclaimer: I am not experienced at this, so I might use the wrong terminology, or have some totally stupid ideas. The point is to learn by doing, and sometimes that involves failing and looking really stupid.

Now having said that...

Last night I started working on a project that I've been toying with the idea of for a while.

I want to make a virtual machine that meets all the following critera:

And for these goals:

So after one night of work I have the start of the VM, a mostly complete assembler (not using LCC's assembly), and a disassembler. At the moment it's possible to write some very simple assembly programs and do basic flow control and memory access. Only the "add" instruction has been implemented on the arithmetic side.

The specs of the VM are (right now):

That's all I have right now. I'll add more information as I piece it together. I haven't done a good job of making the code presentable, so no source code or example code yet. But maybe soon. 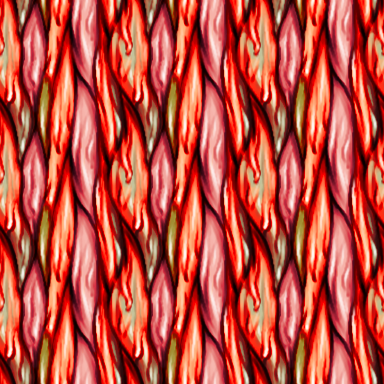 Fleshy tiles. Maybe I can make the game more like Galshell.